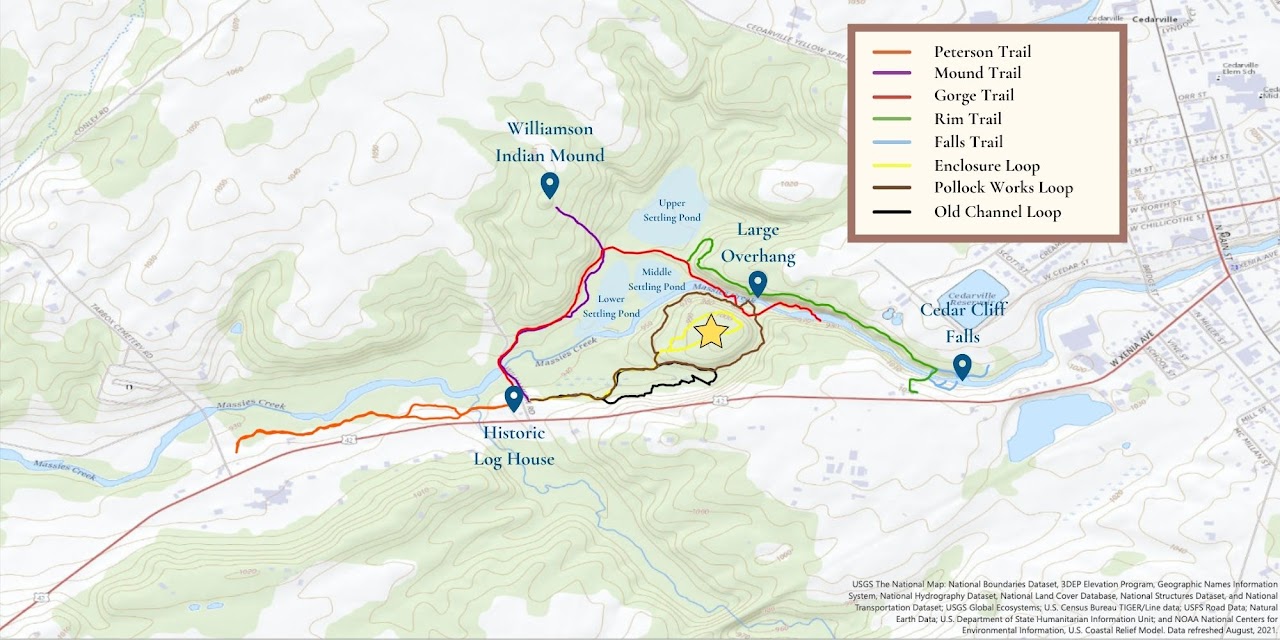 What is Pollock Works?

Pollock Works is a significant geomorphologic feature at the Indian Mound Reserve. This 12-acre plateau1 is considered to be an island and is encircled by the Pollock Works Loop trail. You’ve likely noticed that water does not currently surround this area; however, Massie Creek used to run through a channel around the raised island, making it a natural enclosure (you’re probably starting to realize where all these trail names come from). This channel has since been abandoned, and Massie Creek has selected its course around the north side of Pollock Works.

The abandoned channel, which is traced through the Pollock Works Loop and Old Channel Loop trails, is a beautiful area of the park. As you walk along these trails, you’ll see exposed bedrock, lush vegetation, and maybe even some wildlife! This area has a rich history as well.

It is believed that the Hopewell Indian tribe played a role in the formation of this earthen enclosure as well.2 These people were active in the area between 100 B.C. and 500 A.D.3 Similarly to the Williamson Indian Mound, Pollock Works was built up by an indigenous people – but in contrast to the Williamson Indian Mound, Pollock Works was also a partially natural structure. It is not clear whether the Hopewell Indians built this mound as site for ritual services or as a lookout, or potentially a combination of the two.4 There is evidence that animals were kept here, as it provided a natural enclosure.

Several excavations have been conducted at Pollock Works since 1981, many of which have been led by Dr. Robert V. Riordan from Wright State University. Archaeological studies have revealed that the construction of Pollock works appears to have taken place in five building stages over two centuries. There was also evidence of major fires across the plateau, possibly due to warfare. These fires could be the reason for the ongoing construction. It is clear that generations of Hopewell Indians were committed to the conservation of Pollock Works.5